INTERVIEW: Patawawa, the UK’s newest disco phenom, had a chat with us about their new EP and how they’re lighting up festivals across Europe,.

By pbandgoodjams in Interviews, Tasty! on June 10, 2019
One comment

Patawawa are taking disco into 2020.

After making waves in 2018, the nu-disco trio Patawawa just shared their sophomore EP London, Paris, New York, Matlock and have a string of upcoming festival and tour dates this summer. First hopping on to my radar with their French Horn Rebellion collaboration more than a year ago now, “Mr. Romantic,” and following through with Tasty! Jams this year in March and May they’ve quickly become one of my favorite new groups. Their modern disco sound is unmatched right now, morphing together synth-pop, disco sounds with pop choruses and an undeniable indie feel, it’s sure to get you tapping your feet if not fully up and out of your seat. The group, made up of Derbyshire, UK’s Beth, Sam, and Rory, just played The Great Escape last month and I got the chance to ask Sam a few quick questions about their new EP and what’s next. Catch the full interview below!

First up, how was your experience this past weekend at The Great Escape?

The Great Escape was crazy! A festival on an English beach doesn’t seem right to me but it worked, and the crowds were unreal which never hurts.

I’ve read that you’re giving Disco a “modern makeover”, so to speak, how do you describe your sound and do you think that’s an accurate description?

It’s not a bad lil stab at it! We usually go with indie/disco/pop, that covers most bases.

Who are some of your biggest inspirations — musically or otherwise? 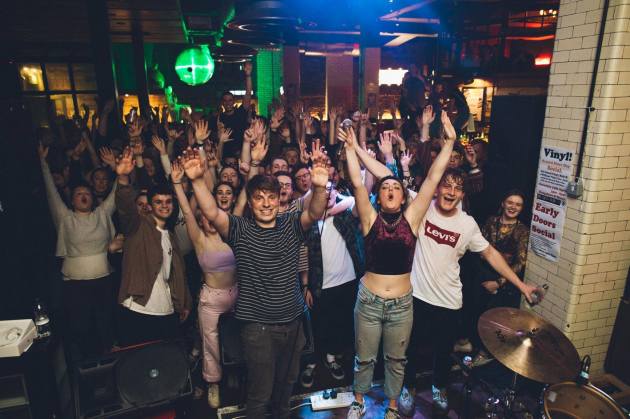 What was recording in Paris like for you being from Matlock? Why did you make the decision to record there?

We got offered a studio for the week free of charge, so we booked ourselves straight out and got eating croissants for a few days in the Parisian sun.

What inspired you to list those locations in that order for the EP name, London, Paris, New York, Matlock?

This may be a hard one, but do you have a personal favorite song off the project?

A mother doesn’t have a favorite child!!!

How do you think the group and your sound has changed since your debut, Bedroom?

We’ve all put a stone on but we still sound similar.

Any new or lesser-known artists that you guys have been really into lately that you’d like to share?

Carwyn Ellis & Rio 18 only have one song on Spotify but it’s amazing and I want to hear way more of that.

What’s next for you guys? Where do you see yourselves a year from now?

Still juggling 4 jobs and living with my mum hopefully!